Years ago, in the middle of my navy career there were some doors that needed to be pried open.

Soon after the first Gulf War ended in 1991, the political debate began about what combat roles women aviators could and should hold. Up until this point, women had flown in the Gulf War, but only in support roles because of the combat exclusion laws. The reality, however, was that women were in combat, just not recognized as combat aviators. They flew support aircraft carrying supplies to the front lines, but their aircraft could not be armed. Essentially, women could be shot at, but could not shoot back. It was time for change.

I knew it and so did many other women military aviators.

What did we do? We went to Capitol Hill.

Thus began our work to repeal the combat exclusion laws, the laws that prevented us from serving in operational squadrons and on Navy combatant ships. Captain Rosemary Mariner, the first woman to qualify as a Navy jet pilot, spearheaded our charge. Along with other women military aviators, both active duty and reserve, we joined forces with the WASP, the National Organization of Women (NOW), and the Women’s Research Education Institute (WREI). Together, we traversed the halls of Congress and educated those in Washington on the combat aviation roles women were qualified to fill. We attended strategy meetings, met with our congresswomen and congressmen, were interviewed on television, and wrote articles for the Washington Post. We showed them what real women military aviators looked like and that we had the skills, confidence, and mettle to fly combat aircraft.

They listened and Congress changed the law.

Although we joyously celebrated the repeal of the combat exclusion laws, I was not allowed to go to a combat squadron. I had been promoted to lieutenant commander (LCDR) by this point, and I was deemed by the Navy to be “too senior” to transfer into a fighter squadron. Certainly, I was disappointed. But at the same time, I was proud that what I had accomplished in the Navy had helped change our lawmakers’ minds.

The alternate pathway for me was to go more deeply into research, development, test, and evaluation. I transferred into the aerospace engineering duty officer community, where I worked in program and project management and what I call “the business side of the Navy.” I had a great career, but my flying days were behind me.

Today women in the services fly unrestricted. I am proud of that fact.

So, get out there and open doors! 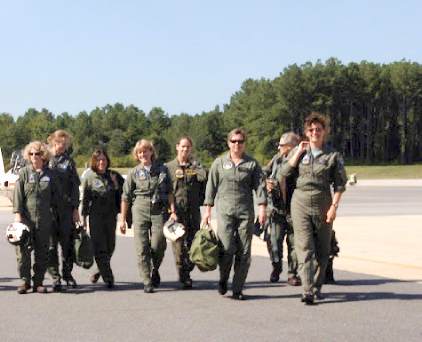